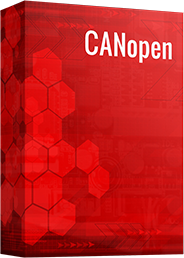 Universal ANSI-C conform and hardware independent software library for the CANopen higher layer CAN protocol. Supports development of devices. It is conform to the standard CiA-301 V4.2 and CiA-302.

The CANopen Library provides all required services for a CANopen compliant communication according to the communication profile CiA 301 V 4.2. It facilitates easy and fast development of master and slave devices and is able to serve one or multiple CAN-Controller in one device.

The CANopen Library is available in different expansion stages:

Access to the hardware is carried out via a defined driver interface, which is available for many CPU- and CAN controller with and without operating system (see CANopen Driver Package).

The CANopen Library is based on ground of the communication profile CiA 301 V4.1 of the CiA e.V. "CANopen Application Layer and Communication Profile" and EN50325-4 , respectively, and provides all services specified therein. It is completely written in ANSI-C and can be compiled with every ANSI-C compliant compiler.

Depending on the required scope of functionality the CANopen Library is available in different expansion stages. For development of small sensors and actuators with limited CAN- open services the Slave Small-Version is available. Its limitations are composed of a restricted number of service instances and no support for the CANopen services SYNC and TIME.

With the Slave-Version of the CANopen Library all services are provided for development of full-featured slave devices.

Additional services of other communication profiles (CiA 3xx) are provided by means of extension modules.

current CANopen Conformance Test for compliance with the standard.

All hardware specific parts are decoupled from the CANopen protocol stack through a defined driver interface. This provides easy adaptation to different hardware platforms.

The user application communicates with the CANopen Library through function calls and call-back functions. 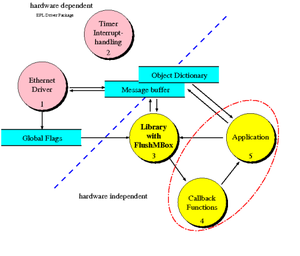 Communication requests from other devices as well as necessary periodical tasks and time out monitoring is handled within the CANopen Library. All requests are proved for correctness (access rights, data types etc.). The application is notified after completion of the communication and occurrence of failures, respectively, through service oriented callback functions. In these callback functions appropriate actions can be carried out from the application.

The object directory is designed to contain references to the variables in the user application. Consequently it is possible to take over variables from an existing software without any changes in the object dictionary.

The high degree of scalability of the CANopen Library is of particular importance for devices with limited resources. On one hand, this is achieved by the modularity in individual service groups, like sdo.c, pdo.c, ...sync.c, and on the other hand, through the use of compiler directives in the respective modules.

Thus, the code size is proportional to the utilized CANopen services.

Furthermore, variants of the CANopen Library for the support of multiple CAN lines (max.255) are available. Therefore it is possible to serve several independent CAN networks on devices without an operating system or with an operating system. The usage of an operating system requires it to provide means of resource protection mechanisms. Each line holds its own object directory and can be used as master and slave, respectively, independent of the other lines. Owing to the separation of the protocol stack and the hardware drivers, the individual lines can also be operated with different CAN controllers.

Delivery of the CANopen Library comprises different example programs that describe the usage of the various CANopen services. All examples contain a complete implementation of a CANopen device including the object directory as well as application code. These are ready to be compiled and run.

Among the detailed documented source code there is the reference manual and an a printed user manual, numbering 200 pages, as documentation of the CANopen Library available.

For development, test and initial operation of CANopen devices port provides a comprehensive tool chain. The creation of the object directory is simplified with the CAN- open Design Tool (CANopen Design Tool Light version belongs to the scope of delivery). 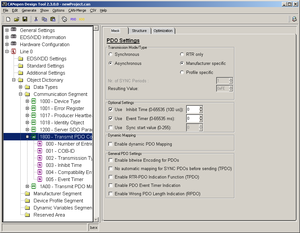 The graphical CANopen Design Tool is available for the creation of the object directory, the electronic data sheet (EDS file) and for the documentation of the device in HTML or text format.

Besides the communication objects of the CiA 301 several application objects in different device profiles are also specified in CANopen. These definitions guarantee a defined behavior of the corresponding device class and enable the interchangeability of CANopen devices.

For these different device profiles port provides extension modules as an add-on to the CANopen Library. These modules allow the customization of an application based on the CANopen standards.

All modules are available in ANSI-C source code and can be used with all versions of the CANopen Library.

Please have a look at the information of the data sheet CAN- open-Library Extension modules.

The CANopen Library runs on targets with and without operating systems. It supports many of the available CAN controllers and many microcontrollers/processors. For detailed information see data sheet CANopen Driver Package.

For systems based on Windows™ the CANopen Library is also available a Dynamic Link Library (DLL). This DLL is available for special hardware boards and contains all services of the Master/Slave standard edition of the library. It can be used to create master or slave applications.

Furthermore CANopen-Starter Kits and a free CANopen Evaluation software on CD are available on request.

Support (up to 30 days after purchase)

For the CANopen Library a one-off license fee in the form of a product / project or site license is collected. Further license fees do not arise from the deployment of the software within the same company (no runtime licenses). It is not allowed to hand over the software and the implementation, respectively, towards a third party.

All changes of current standards as well as extensions through new developed standards are constantly incorporated into the CANopen Library. In order to take profit of the changes port offers all its customers a maintenance agreement with the following conditions:

In order to provide a quick and effective access to the development of CANopen devices we recommend to do the initial operation of the CANopen device together on the target platform. Customer experiences of his/her hardware and the used compiler and the experience of our engineers with CANopen and the CANopen Library can complement each other. This leads to reduced development times and a CANopen conform device.

In preparation of the charged Conformance test of the CiA we provide you our service, knowledge and equipment. With the preparation and execution of preliminary tests possible problems can be detected and removed.

Take profit of our Know How during planning and development of your CANopen devices and networks. An ideal design requires knowledge about the used protocols and the system environment. Our competent engineers create together with you a cost-efficient solution that fits your needs to an optimum.

Software development services for CAN, CANopen and DeviceNet

To simplify the first steps with a new technology port provides one-day and several-days trainings for the topics of CANopen and its services as well as for the CAN- open Library and its tools. These trainings can be given at port or at your companies rooms and are exclusively carried out for your workers.

You want to get to know about the advantages of our CANopen Library? Then our user manual is the best starting point to get an overview about the functionality and deployment possibilities of the CANopen Library.  Here you can order your copy. service@port.de.

For a quick and uncomplicated start with CANopen the CANopen Starter Kit provides everything you need. It comes with a pre-compiled CANopen Library for your target hardware and several simple examples that provide a first insight and that ease the start with CANopen. As hardware interfaces several possibilities are avaliable, like PC cards, parallel port dongles, PCMCIA cards and USB interfaces. With these setting up a CAN network is as easy as a children’s game. 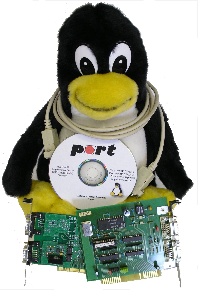 Further informations can be found at CANopen LINUX™ Starter Kit.